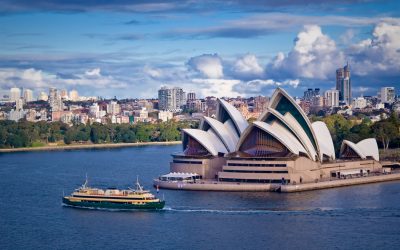 Australia boasts some of the world's most beautiful natural wonders such as the Great Barrier Reef - the world's largest coral reef system, the Heritage Listed Ayers Rock (Uluru), the Bungle Bungles in Western Australia, the Twelve Apostles along the Great Ocean Road. Man-made icons include the Sydney Harbour Bridge and the Sydney Opera House.
The population of Australia in 2011 was 21,507,717 with the most populated states being New South Wales, Victoria and Queensland. Canberra is the Nations' capital is an interesting city that is home to the Parliament House, Old Parliament House and the War Memorial.
The geography of Australia ranges from deserts, mountainous, tropical islands, rain forests, lakes and rivers. The longest river in Australia is the Murray River which is 2375 kilometres long. The Murray River begins in New South Wales, then travels through Victoria and finally South Australia where the Murray Mouth meets the Southern Ocean. The Murray River is home to a variety of wildlife such as platypus, Murray cod, golden perch, trout and cod. The river is also famous for its paddle steamers and there are paddle steamers that cruise along the river for several days.

Why Austrilia (For Study):

The Department of Home Affairs(opens in a new window) has financial requirements you must meet in order to receive a student visa for Australia. From 1st February 2018 the 12 month living cost is: